Re: You’ll Know When You Get There

Karl: My initial impression of Bob Gluck’s You’ll Know When You Get There: Herbie Hancock and the Mwandishi Band (University of Chicago Press, 2012) is that it is a serviceable, largely descriptive text on a very worthy (and often ignored) topic. Considering the book’s thematic emphasis on the Mwandishi band’s transcendental, “expansive” qualities, You’ll Know When You Get There is surprisingly dry–not in an enlightening, academic way (ala Lewis Porter’s Coltrane book), but rather in a fashion that I can’t describe as anything other than (intermittently) boring. Another word that comes to mind is “incomplete.”

I’m all for dense, theory heavy music literature, but the (still evolving) canon of jazz studies proves that you can write with an intellectual sheen and still capture and illuminate decidedly transcendent topics. However well they may (or may not) capture the “spirit” of their respective subjects, George Lewis’s A Power Stronger Than Itself, Robin D.G. Kelley’s Monk book, and Porter’s Coltrane bio (to name three examples) are definitive factual and analytical texts that succeed in shedding new light on topics that readers may already be intimately familiar with… they also know when to let the music speak for itself. No one will need to duplicate the work in those three books any time soon–not without the risk of looking foolish, like Ben Ratliff does with his half worthwhile (the back half), half worthless (the front half) Coltrane: The Story of A Sound. Gluck’s book accomplished the key task of making me want to re-listen to the Hancock Sextet’s music, but it also made me long for something either (a) more analytically substantial and ambitious or (b) fun and iconic, like certain slighter–but more anecdotally thoroughgoing and thematically powerful–texts (J.C. Thomas’s Coltrane bio, John Kruth’s Bright Moments).

The key issue with the book–at least in terms of what is there–is that it spends way, way too much time on declarative, pseudo-analytical play-by-plays of the Sextet’s recordings. The Porter Coltrane book is, again, a prime example of how insightful theoretical analysis can help communicate broader philosophical or thematic points (Porter’s breakdown of the formal cohesion underlying A Love Supreme–a suite that is nothing if not about spiritual and conceptual unity–is virtuosic), and while the Mwandishi band is a rather dissimilar topic, I can’t help but think that Gluck’s analyses would have been much more interesting had they followed something like Porter’s mold–i.e., hard theory that actually says something about the artist’s creative endgame.

As it is, Gluck will more or less make a point (e.g., “At this point [the recording of Sextant] in the development of the band, its sonic palette, acoustic, and electric, has expanded to a range far broader than ever before.” [133]), and then describe–in excruciating detail–a recording that intends to illustrate that point. What we’re left with–for the entire middle stretch of the book–are a series of chronologically ordered lists of things that happen on recordings. Yes, the horn section’s use of extended techniques does parallel Hancock’s growing interest in abstract electronic textures, but I don’t need a description of recordings I already have on hand–I want an analyst to breakdown the conceptual relationships he posits and to tell me why they’re important.

Yes, Hancock was into Stockhausen–how about a brief analysis of a Stockhausen piece that has something in common with the electronic textures on Crossings (i.e., why was this influence important at all)? Yes, the Sextet’s use of small percussion has plenty in common with the then-burgeoning AACM’s musical practices–how about an analysis of how a long form, live recording of the Sextet may or may not parallel the slow motivic evolution in the Art Ensemble of Chicago’s People In Sorrow (i.e., is this just a weird parallel, or did the Sextet and the AACM have any truly interesting practical overlap)? As it is, Gluck’s points are clear and agreeable, but there’s scarce little critical insight anywhere in the book. (And it really bothers me that, as exhaustive as his chronological descriptions are, Gluck slights certain truly fascinating moments in the service of his overarching theses. Case in point: there’s this ridiculous acoustic piano solo toward the end of “Hidden Shadows” [on Sextant], and it completely reframes the foregoing electronic melee. Please correct me if I’m wrong, but Gluck doesn’t seem to mention it at all. Hancock’s unexpected entry on an acoustic instrument suggests to me that the swirls of noisy, electronic activity on Sextant are less about the encroachment of abstraction and more about the superimposition and stratification of different levels of “in”ness and “out”ness… that has a lot in common with the AACM, btw. Weird that Gluck doesn’t talk much about “Hidden Shadows,” considering the degree to which Christian McBride freaks out over it later in the book.)

Granted all this, there’s plenty of good in the book, too. The first person reminiscing throughout the book (on the part of both some famous fans and the band) is valuable and intriguing, and I very much appreciate the degree to which Gluck attempts to frame the Sextet within the larger musical framework of its era–not just jazz (the involvement of David Rubinson, the inside baseball on Hancock’s contracts with Warner Bros. and Columbia, the way in which Patrick Gleeson’s expertise–decidedly un-jazz–interacted with and integrated with the Sextet’s milieu). Plenty of ham-fisted grammatical choices (especially toward the end of the “analysis” chapters) and a few really perplexing errors (“Ostinato” is subtitled “Song For Angela” at one point, Aries is spelled Aires a couple of times–maybe this is some alternate spelling I’m not aware of? This is really nitpicking now, but the book is riddled with stuff like this) don’t detract from the substance that book definitely has, and Gluck’s affection for the music is truly present… I just wish there were more of substance in the book, since I felt like I’d read half of it having perused Gluck’s earlier article on Mwandishi:

Ultimately, I’m grateful to Gluck for going through all the trouble of researching, writing, and completing a book on a subject many might consider marginal and arbitrary. The book is deeply flawed, but it’s enthusiastic and not without a certain depth. The impact of the Mwandishi band is still being felt on jazz, creative music, and electronic music decades later (incidentally, stuff like Shackleton still sounds like cut-rate Sextant to me–maybe it’s my ears, maybe people really are still trying to catch up to music from the turn of the 70’s), and hopefully–as musicologists’ valuations of the Herbie Hancock Sextet continue to evolve–someone will come along and further Gluck’s work.

Karl: I’ve been so bummed out by all the death news that I excused myself from jazz internetalia for a minute… it’s surely a downer that we’ve lost the likes of Motian and Rivers, and it’s a lesser shame that (in light of all the recent ego battles and who/what sucks conversations) memorializing the dead seems to be one of the few unifying factors among jazz punditry. Really, it’s all on us–most of the people we’ve lost lived long, full musical lives, and they died in the “best” way possible for folks in our line of work–with boots on, and kicking. Half of me wants to spend the holidays listening to Motian’s autumnal recordings and getting reacquainted with stuff like Waves and the Rivers/Holland duos (that I haven’t broken out in ages), the other half knows that it’s time to step up, put some back into making my own music, and make sure the circle goes unbroken. I mean, the way Sam went out, still energetic, intellectually lucid, creatively viable and full of ideas–new music–that’s as much of a Butch and Sundance ending as anyone can hope for.

All that being said, I’m glad I got to spend some (recent) time with Rivers’s back catalog. He was a cracking session player, for one–his quiet sense of rhythmic chaos is a really nice counterbalance to Grant Green’s tartness and Larry Young’s shimmering precision on Into Somethin’, and Rivers’s sheer creativity and charismatic dynamism transform Spring from something of an exercise in abstraction into a mystical document. And Sam knew how to choose sidemen… pairing up the Carter/Williams rhythm team with Byard (on Fuchsia Swing Song is really interesting, since it endows what might otherwise be “just” an energetic post-bop session with serious rhythmic tension (Carter is a little behind the beat and Tony is a little on top of it, and Jaki is just this wobbly whirlwind of stuff–it’s crazy just how implicit the “free jazz” is on Fuchsia, since it’s a really straight ahead album on paper), and Contours brings out the mystery and resourcefulness of guys like Freddie Hubbard and Herbie Hancock in a way that no album outside of Empyrean Isles really manages (I’m not counting the Miles stuff here…).

Naturally, Sam was a great doubler (a friend may have characterized it well when he said that, although Rivers may not have been as virtuosic a doubler as Dolphy, each of Rivers’s instruments took on a really unique characteristic) and an amaaaazing soloist–maybe the most surprising, most completely versatile soloist of the post-bebop era. I’m fully confident that you could plug Rivers into absolutely any context and get fireworks of some sort. Much has been made of his tenor playing in recent weeks, and I think the reason it’s so immediately gripping is that Rivers’s ideas seem to have articulated most clearly on the bigger horn. Sam’s tenor playing sounds both panoptic and kaleidoscopic–it seems like anything can burst out of his horn, and every note is pregnant with the implication of a million other ideas. I love the diversity of Sam’s grungiest work (the Tuba Trio music and all the Black Africa albums, although some of the Holland/Altschul music might fall into this category)–vocal interludes and all–and I think part of what makes this stuff so readily listenable to me is how subversive it is within its own idiom–i.e., Sam will not do “free jazz” in the regular free jazz way, and you might find yourself down one of any number of detours.

I’m least acquainted with–and, for that matter, probably least emotionally “connected” to–Sam’s later trio with Douglas Matthews and Anthony Cole and the later Rivbea Orchestra Music. I recognize that it’s ultimately easier to appraise old, canonicals works than a musician’s living legacy, and that made it difficult for me to remain abreast of “late” Rivers. That being said, the personal and historical context of this music is so eminently respectable that I can’t imagine I’ll go long without delving deeply into it. If Sam had merely “lived that long” he wouldn’t be so widely celebrated–it’s the fact that he continued to fire and burn on his own creative cylinders for such an extended duration, like a marathon runner who finishes with momentum to spare, that Rivers will occupy such a special place in collective memory.

More than anything else, listening to Sam’s music has given me fuel to compose and play. I’m of the mind that what separates great art and merely “good” art is that the latter impresses, the former inspires. (I’m reluctant to end on an axiomatic note, but the real work starts off the page, obviously/improvisationally. A luta continua.) 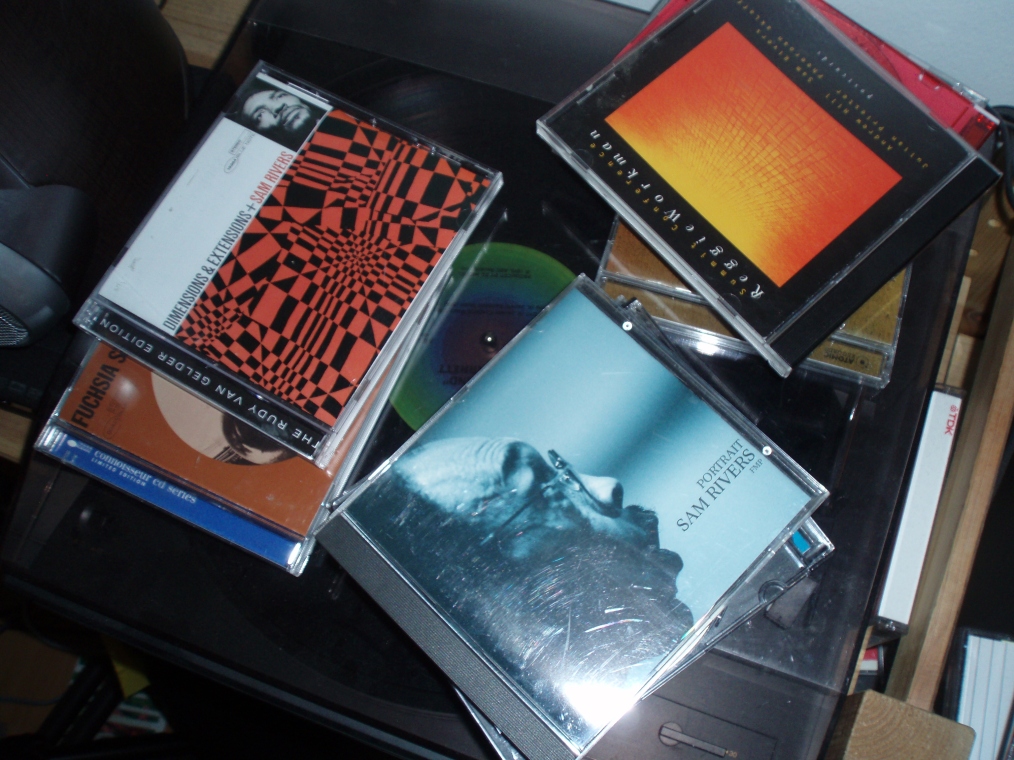